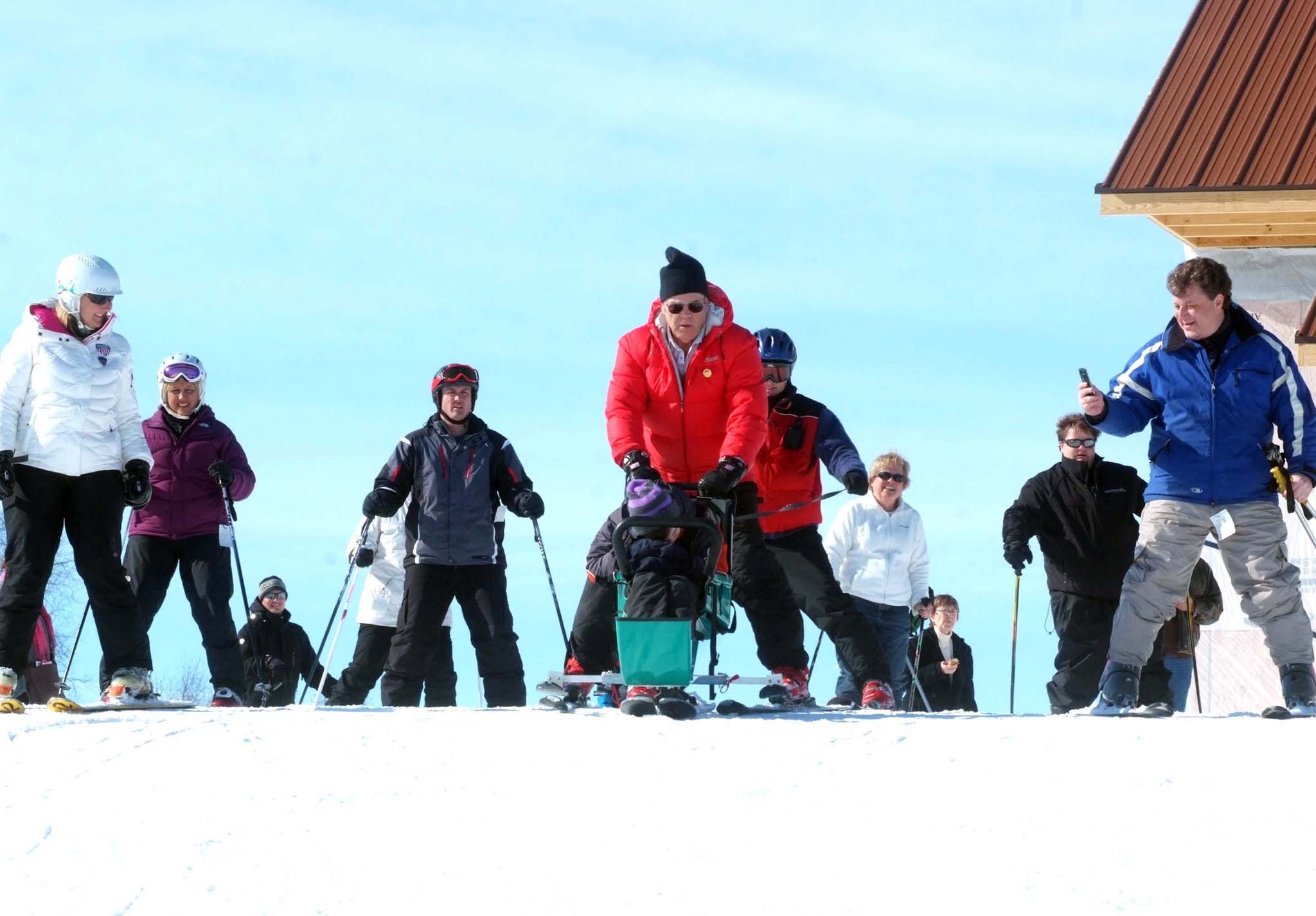 Nelson perished in New York City on Sept. 11, 2001, at the World Trade Center Complex. Two years after her death, Ann’s mother, Jenette, discover a “Top 100” wish list on her daughter’s computer that Ann had started about her dreams and wishes. One of Ann’s bucket list wishes was to buy a home in her home state of North Dakota.

The wish list was picked up through media coverage and Jeff Parness, the founder and CEO of New York Says Thank You Foundation, heard about Ann’s bucket list and contacted her parents expressing his wish to assist Ann’s dream of coming true.

Through a conversation with the Nelsons the idea of Annie’s House was established, which provided an adaptive ski program for children and adults with special needs, along with wounded soldiers who have been hurt in combat zones.

With Ann’s love to be with children, help others and ski the ground was broke for Annie’s House in late May of 2012 with Parness and the students from GTS doing the honors.

On Saturday afternoon, eight students from GTS returned to the winter park and were given the opportunity to ski with the adaptive ski equipment provided by Annie’s House. Andy, Hunter, Ricky and Justin took to the slopes, while Amanda, Torrie, Katie and Holly enjoyed the park’s tubing hills.

For one student, Andy, who has Cerebral Palsy, which affects his motor abilities and strength, and is wheel chair bound, it was an exciting day for him because he skied for the first time in life with the assistance of Ann’s father, Gary.

After Andy was fastened into an adaptive ski sled, the bi-ski, he and Gary skied down the Pony Lift slope (which is located directly in front of Annie’s House) with numerous individuals all around him chanting his name as he made his way down the ski hill.

Andy was chosen to go down first because he was the first GTS student to turn dirt in the ground breaking ceremony  for Annie’s House.

During the build in September, the volunteers also constructed two miles of hiking trails inside the winter park, and an adaptive fishing dock on a lake on the park’s property. One of the hiking trails is  named after Andy.

A ceremony also took place in the morning where state politicians, school administrators, Annie’s House volunteers and adaptive ski instructors were given the opportunity to tour the new ski lodge, see a film documentary on the Annie’s House project and listen to a variety of individuals speak about the importance of Ann’s dreams.

Parness, during the ceremony, told a special story about the origins of Annie’s House. He stated that there was a man from New Orleans who was a survivor of Hurricane Katrina and who has spent years working with the New York Says Thank You Foundation building homes for others whose lost theirs due to disasters.

When Parness told the man that they were heading to North Dakota to construct Annie’s House, the gentleman asked Parness what disaster had happened in that state to take New York Says Thank You to that part of the country.

“I told him that Ann’s dreams were destroyed,” said Parness, who added that this man immediately agreed to come to the Turtle Mountains to assist Ann when he heard about her wishes. “This building is a testimony to Ann and to Ann’s spirit,” Parness added.

Rep. Jon Nelson-R, Rugby; Sen. David O’Connell-D, Lansford; Rep. RichardAnderson-R, Willow City and Rep. Bob Hunskor-D, Newburg attended the event. Nelson stated that the House members had placed $200,000 in the House budget for Annie’s House, which was passed this past week. The house budget now goes to the Senate for approval.

Through Ann’s bucket list, Annie’s House became a reality due to the assistance of the New York Says Thank You Foundation and thousands of volunteers from across the world.

Bottineau Winter Park also has the distinction of being the only adaptive ski park in North Dakota; and, all because one North Dakota girl had dreams not only for herself, but more importantly, for others in need.