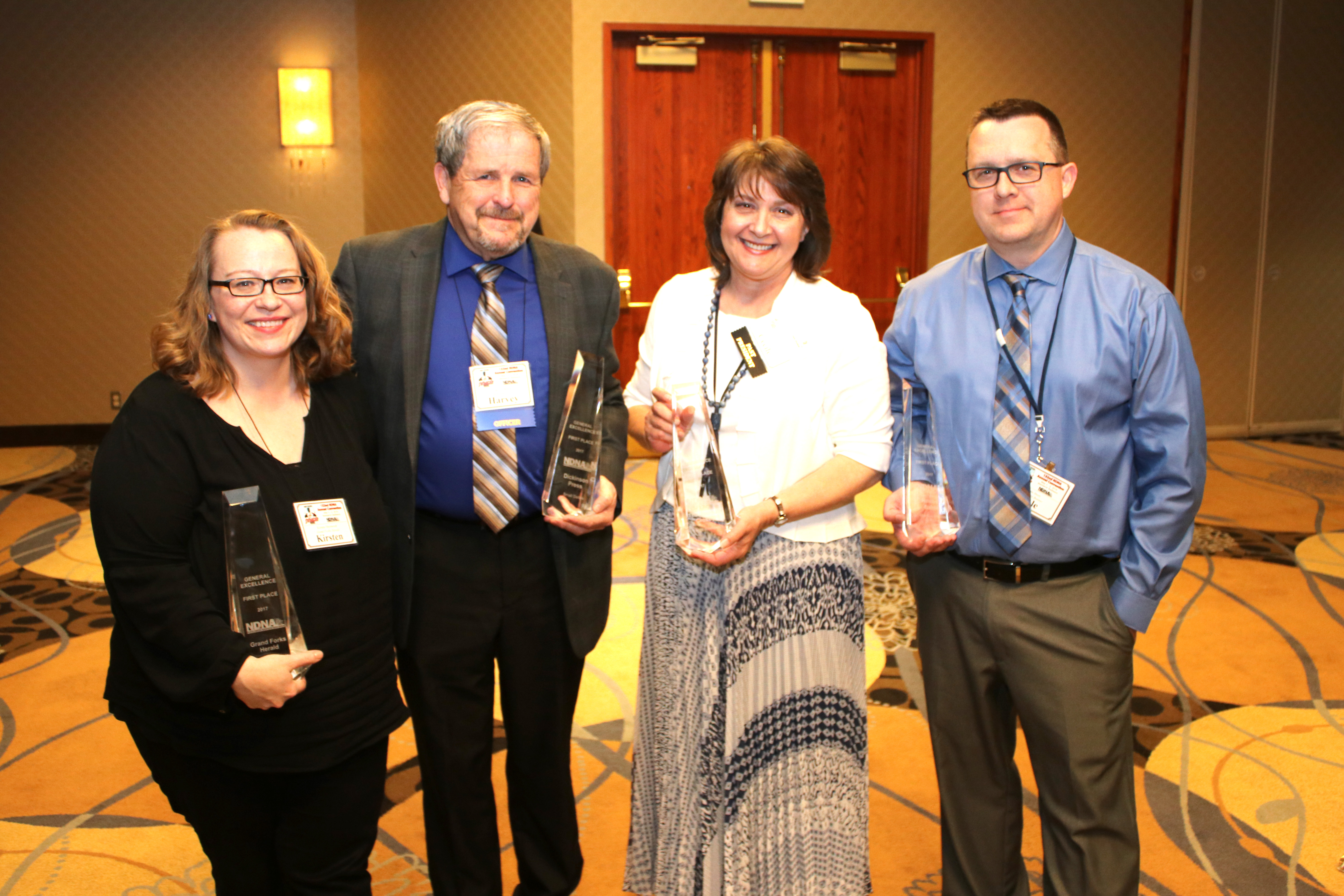 North Dakota’s top newspapers by circulation class are The Grand Forks Herald, The Dickinson Press, The Journal of Crosby, The Hillsboro Banner and the Walsh County Press of Park River.

They were the first-place winners in the general excellence category of the North Dakota Newspaper Association’s annual Better Newspaper Contest.

Judging of general excellence covers all aspects of the newspaper, including news and advertising, layout and design, and even headline writing.

The awards were handed out Friday, May 4, 2018 during NDNA’s 132nd annual convention, held in Bismarck.

The Forum of Fargo-Moorhead was second and the Bismarck Tribune third in general excellence for large dailies.

For small dailies, The Jamestown Sun was the second place winner in general excellence and the Daily News in Wahpeton was third.

For large weeklies, second place went to the McKenzie County Farmer of Watford City; third place to The Walsh County Record of Grafton; and honorable mention to the Bottineau Courant.

For medium sized weeklies, second place went to The Leader-News of Washburn; third to the Hankinson News-Monitor, and honorable mention to the Foster County Independent in Carrington.

For small weeklies second place went to The Mountrail County Record in Parshall; third to the Billings County Pioneer in Medora; and honorable mention to the New Town News.

Sweepstakes awards were also handed out to the newspapers in each category who received the most awards in the Better Newspaper Contest.

Winning sweepstakes awards were the Forum of Fargo Moorhead; The Daily News of Wahpeton; The Walsh County Record of Grafton; The Hillsboro Banner; and the Walsh County Press of Park River.

Several special awards were also handed out Friday, including:

n Pace Maier of the Hillsboro Banner was named rookie reporter of the year.

n The award for Community Service Journalism went to the staff of the Bismarck Tribune for its year-long coverage of the community’s effort to resolve its problems with homelessness.

n The High School Reporter of the Year Award went to Lenora Combs of The Journal in Crosby.

n The Newspapers in Education Newspaper of the Year Award went to The Forum of Fargo-Moorhead.

n The award for Public Notice Journalism went to The Forum of Fargo-Moorhead for its detailed explanation of a public notice for a massive special assessment district created for the Red River Valley flood control project.